Our collection of writings, interviews, discussions, and anything else Steve has published

Q & A with Steve: Animal Training 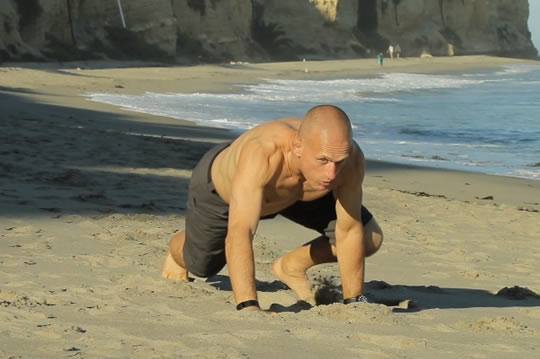 Q: Steve, why don't you like animal movement drills? I was all set to sign up for their seminar. (submitted by a jiujitsu student)

A: Unlike so-called animal movements trending in the fitness business, the less-exotic vestibular reset drills are relevant movements of human development. These are natural human movements essential for proper brain and body development in the human child. Recent discoveries about aging and loss of movement patterns (due to sitting and sedentary lifestyle) suggests that reclaiming (remembering) these movements, and refining the skills, enhances general learning (intelligence) and movement patterning -- even in adults. This comes from qualitative improvements in nervous tissue and nerve function.

When you're livin' the vida sofa, the best remedy is reawakening basic human movements. For best results, practice the 12 archetypal human postures while you're down there on the floor.

Why chase after the animal drills? Why regress? Train with the benefit of the frontal lobe. Most people don't even have time in their day to follow through on their human obligations.

Attempting to mimic animals is silly at best and potentially harmful (to sport athletes). While the patterns may look relevant, they are not so much. The skill development to acquire particular animal movements adds up to to an entirely new discipline -- in other words: fad fitness -- with little-to-zero relevance to BJJ, or anything else.

With regards to jiu jitsu, the acquired animal skills are likely to produce a negative skill transfer.

Here's the thing: any adept of jiujitsu is by definition what is referred to as a discriminator, because their nervous system can discriminate between different kinds of skills without suffering motor-confusion. These discriminators represent about 10% of athletes.

Non-discriminators (the rest of us) when we crowd our training, end up with motor-learning confusion. This is akin to indigestion from crowding our dinner plates. Stick with basic, wholesome exercises to build the body you want.

For the BJJ guys: the majority of jiu jitsu students are lacking consistent skill rehearsal. They will benefit from regular repetition of the exact skill-set required for BJJ. You cannot -- must not -- fill this gaping deficiency by substituting other, non-related skill-sets. This also applies to generalists: do not gormandize your training.

To clarify, there are six basic grappling skills required to progress in BJJ:

For improved skillular development, combining these key movements together intoâ€‹ flow sequences is your best bet.

Legend has it certain traditional martial arts are based on ancient sages' observations of animals, but if you look deeper, you will see that the likeness is not on the animal movement per se, but the principle of defensive action. This is an important difference.

While it's true that mimicking animal movements can confer some benefit -- at least you're moving around! -- for the generalist, it's not the best use of your time; there are so many things that need to be done to bring the average guy up to any standard of fitness, and the programs are merely a distraction from the real work. For those who claim to have received big results, I counter you could have done better with a program of movement not based on fantasy.