This video series is intended for the jiu-jitsu student who wants a catalog of techniques, the layperson intrigued by the possibilities of a practical self-defense system, or anyone who appreciates Steve's consistant combination of ability, education, aesthetics, and entertainment value.

A perfect adjunct to jiu-jitsu training, this video series is distinctive in its lack of discussion. The action is shown three times: first the demo, then instant replay, and again from a second angle.

The complete set of videos forms an overview of the Gracie self-defense system as taught to Steve by the sons of Helio Gracie, useful for the student and professional alike, or the average guy who wonders about his own potential when faced with a threatening situation.

A no muss/no fuss, all-action-and-no-dialog, graphic stream of the rational overcoming evil, in 15-30 second increments, for those who wish to visually experience the Gracie system of street self-defense in a convenient format.

Realize how you can protect yourself in virtually any situation - from blocking a punch, or escaping a bear hug, to disarming an assailant with a knife, gun, club, bat, or chain.

Once upon a time, until 1967, there were no tournaments associated with the practice of Brazilian Jiu-Jitsu. Street fighting, with all its risks, was the only testing ground.

In contrast to the sport jiu-jitsu objective to win against an opponent of similar size, in a closely-monitored and controlled match, the Gracie Jiu-Jitsu objective remains to this day enabling practitioners to defeat an all-out attack from a larger and more athletic opponent. This point is well-illustrated in this video series. 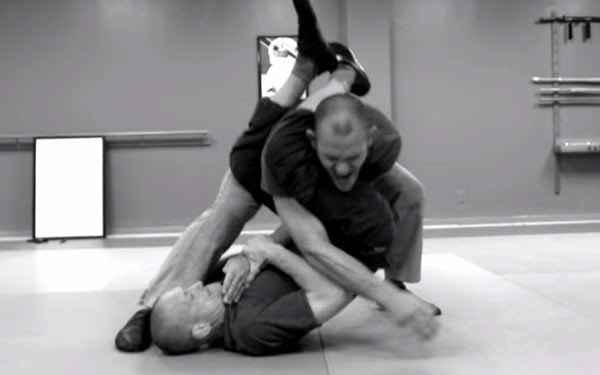 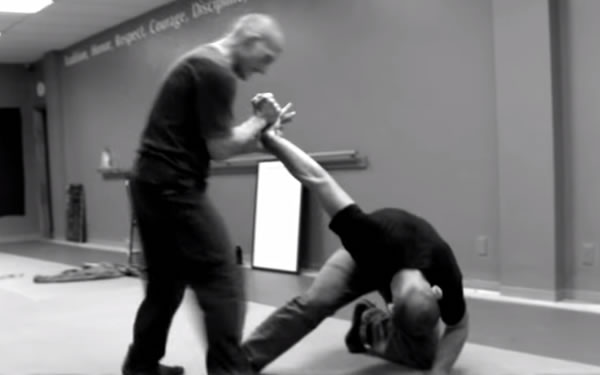 $45 instant download
Purchase both videos together and receive the gift of Steve's Gracie jiu-jitsu seminar, which Steve presented in Ohio the day after shooting this catalog series. Watch Steve teach a roomful of local students the basics of the same techniques in the catalogue series.

This series is not intended for anyone requiring in-depth explanation of the techniques presented.

This is not a tutorial, but a catalog and study guide.

This video is not a substitution for physical training with a black belt in Gracie jiu-jitsu.

Why did you make this series?

I wanted to show the vast array of techniques included in the Gracie system.

I put this video together as a memory jogger for those who would like to practice the techniques without enduring the usual video tutorial dialog.

If you're going to be a materialist, you'll need to know how to defend your stuff.

Why black and white?

I didn't want the viewer distracted by a lot of talk and color stimulation.

I especially like the black and white because it recalls old-school techniques. Many of these techniques were modified by Helio Gracie himself, to boost the smaller, weaker target of violence.

I just watched Steve Maxwell's Gracie Jiu-Jitsu Self-Defense Catalogue and I am much impressed with the complexity of the stuff he shows. This is not a beginners guide to self-defense because Steve is showing the moves without explanation (so everything is shown in great detail and slow motion) but if you are a Jiu Jitsu student and looking for a curriculum of self-defense techniques, these videos are for you.

I've watched most every BJJ self-defense video out there but none of them include so many variations and moves like Steve's videos.

You will find self-defense against grabs and sucker punches but also fairly advanced knife and gun defenses even while on the ground.

This stuff is the soul of BJJ and every practitioner should know these moves regardless if he is blue or blackbelt.

I can imagine many BJJ teachers will get these videos and use them for their own school because they are simple and effective and greatly structured.

I will definitely use Steve's videos and implement them into my personal training and teaching. If you love old-school BJJ, you have to get these downloads. -- Bjorn Friedrich www.Fighter-Fitness.com

While many people view Steve Maxwell as a cutting edge fitness educator and world traveler, I am aware of Steve's roots in combat arts. He has an extensive background in martial arts that includes, but is not limited to wrestling, kenpo, muay thai, sambo, systema and Gracie Jiu Jitsu. I like to be clear so here is his official grappling bio -

"Steve has a long history of competitive grappling. He wrestled competitively through high school and college (NCAA Div, 1) and in the US Army. He now holds a 4th degree black belt in Brazilian Jiu-Jitsu. His BJJ competition record includes five Pan American and three World Championship gold medals."

Steve's approach to teach martial arts or fitness is simple. You have to communicate effectively. That communication can verbal, tactile or visual. In this case, the visual medium in used by Steve in a remarkably effective capacity. He's catalogued the Gracie Jiu Jitsu self defense system. These videos are not a tutorial on the Jiu Jitsu practiced by Helio Gracie, but rather a visual journey of both stand up and ground defense. Both empty handed and armed attacks are covered. The clarity is outstanding and I think this is a great product simply because this area of the art does not get the exposure it should. Some "martial arts forum experts" view Gracie Jiu Jitsu as simply, "Pajama Wrasslin' ". Nothing could be further from the truth. The art was designed to be used by smaller individuals in street situations with no time limit, rules or referees.

While there are many Sports Jiu Jitsu books and videos out there, the area of self defense or street combat is not as populated. It's for that reason that I like this downloadable video. It's very well filmed, cleanly edited and has a perfect niche in this information hungry world.

Steve's willingness to try new ideas, adapt old ideas and communicate ALL ideas is historically refreshing when every 21 year old is a Fitness Guru or MMA fighter. -- Tom Furman

Gratitude: Steve thanks Scott Burr and Jason Zakrajsek for generously contributing their facilities, enthusiasm, and bodies to this project.